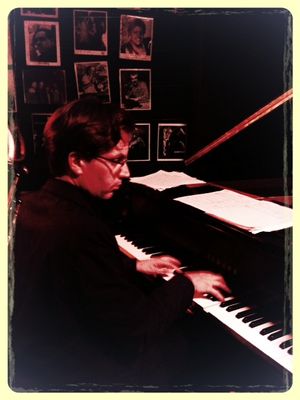 "Mark plays with the touch of Teddy Wilson and the lines of Bud Powell."
- jazz legend Slide Hampton

"...a true master of jazz piano tradition and one of the greatest educators of our time." - Dan Nimmer, pianist with Wynton Marsalis and the Jazz at Lincoln Center Orchestra

Pianist Mark Davis has been a mainstay on the Milwaukee jazz scene for thirty years. His performances display a strong sense of tradition, incorporating the innovations of the bebop masters while still keeping an ear to more modern sensibilities. Whether playing solo or backed by a hard-swinging rhythm section, he features unique arrangements of jazz standards as well as originals that bear the influence of jazz icons such as Bill Evans and Bud Powell.

He began classical piano studies at age eight and soon took to improvising and composing. His teachers included Diane Andreoni, Adelaide Banaszynski, and David Hazeltine. He later studied with jazz legend Barry Harris who remains one of Mark's primary inspirations as a player and educator. Mark began performing in Milwaukee jazz clubs while still a teenager. He gained early experience playing in groups led by local stars such as Berkeley Fudge, Manty Ellis, and Hattush Alexander. After completing high school, his interest in visual art led him to pursue an art degree from Skidmore College in Saratoga Springs, New York. He graduated in 1990 with highest honors. Mark returned to Milwaukee and taught at the Wisconsin Conservatory of Music  and served as Chair of Jazz Studies from 1992-2019. In 2019, he founded the Milwaukee Jazz Institute and currently serves as artistic director. Mark mentors many young, up-and-coming musicians. Many have gone on to successful music careers, most notably Dan Nimmer who has been the pianist with Wynton Marsalis and the Jazz at Lincoln Center Orchestra since 2005. Currently, Mark teaches lessons in his studio, offers online lessons, presents workshops through the Milwaukee Jazz Institute, and is on the music faculty of Alverno College.